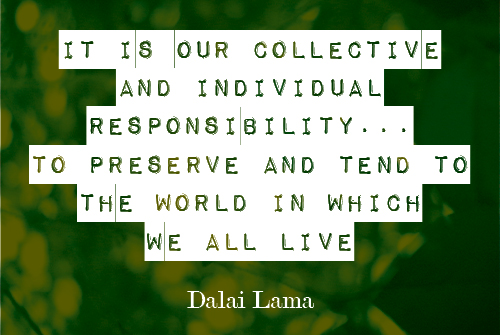 Watch the following trailers of documentaries on our Planet and our impact on the natural environment. Write your personal response in the Padlet: Which trailer caught your attention most? Why? Which one do you find most effective in raising people’s awareness of the need to take action to safeguard and protect our environment? What are the concerns that are expressed by these documentaries. Why are there more and more political leaders and celebrities (Al Gore, Leonardo Di Caprio, Jeremy Irons) who want to become the ambassadors of planet Earth?

An Inconvenient Truth: Why this title? What does it mean? How would you paraphrase it?

You may find this link interesting to further investigate the issues at stake in this documentary.

The 11th Hour: What does this expression mean?

The official film website provides you with more interesting information.

What further information are you being provided with by the following message? Di Caprio himself reveals the meaning of the title. What are we urgently invited to reflect upon? How should we take action?

Trashed: what is the other issue that is dealt with in this documentary?

Once again, the official film webpage can result to be of interest for extra suggestions or information.

Now have a go at the Padlet

Now I would like you to listen to Leonardo Di Caprio’s Speech at the United Nations. The text under the video may help you focus on certain passages. I would like you to write down what strikes you most of his speech (choice of words, body language, the way he delivers his speech, the way he emphasises certain words or he creates pauses). What is the urgent message he is addressing to the UN Assembly? What are his demands/expectations? If you were invited to give your own speech at the United Nations, what would your strategy be? What would your catch phrase be? What would you emphasise?

Thank you, Mr Secretary General, your excellencies, ladies and gentleman, and distinguished guests. I’m honored to be here today, I stand before you not as an expert but as a concerned citizen, one of the 400,000 people who marched in the streets of New York on Sunday, and the billions of others around the world who want to solve our climate crisis.
As an actor I pretend for a living. I play fictitious characters often solving fictitious problems.
I believe humankind has looked at climate change in that same way: as if it were a fiction, happening to someone else’s planet, as if pretending that climate change wasn’t real would somehow make it go away.
But I think we know better than that. Every week, we’re seeing new and undeniable climate events, evidence that accelerated climate change is here now. We know that droughts are intensifying, our oceans are warming and acidifying, with methane plumes rising up from beneath the ocean floor. We are seeing extreme weather events, increased temperatures, and the West Antarctic and Greenland ice-sheets melting at unprecedented rates, decades ahead of scientific projections.
None of this is rhetoric, and none of it is hysteria. It is fact. The scientific community knows it, Industry and governments know it, even the United States military knows it. The chief of the US navy’s Pacific command, admiral Samuel Locklear, recently said that climate change is our single greatest security threat.
My Friends, this body – perhaps more than any other gathering in human history – now faces that difficult task. You can make history … or be vilified by it.
To be clear, this is not about just telling people to change their light bulbs or to buy a hybrid car. This disaster has grown BEYOND the choices that individuals make. This is now about our industries, and governments around the world taking decisive, large-scale action.
I am not a scientist, but I don’t need to be. Because the world’s scientific community has spoken, and they have given us our prognosis, if we do not act together, we will surely perish.
Now is our moment for action.
We need to put a pricetag on carbon emissions, and eliminate government subsidies for coal, gas, and oil companies. We need to end the free ride that industrial polluters have been given in the name of a free-market economy, they don’t deserve our tax dollars, they deserve our scrutiny. For the economy itself will die if our ecosystems collapse.
The good news is that renewable energy is not only achievable but good economic policy. New research shows that by 2050 clean, renewable energy could supply 100% of the world’s energy needs using existing technologies, and it would create millions of jobs.
This is not a partisan debate; it is a human one. Clean air and water, and a livable climate are inalienable human rights. And solving this crisis is not a question of politics. It is our moral obligation – if, admittedly, a daunting one.
We only get one planet. Humankind must become accountable on a massive scale for the wanton destruction of our collective home. Protecting our future on this planet depends on the conscious evolution of our species.
This is the most urgent of times, and the most urgent of messages.
Honoured delegates, leaders of the world, I pretend for a living. But you do not. The people made their voices heard on Sunday around the world and the momentum will not stop. And now it’s YOUR turn, the time to answer the greatest challenge of our existence on this planet … is now.
I beg you to face it with courage. And honesty. Thank you.

If on the one hand there are famous people who become spokespeople for a better future, celebrities who endorse the struggle against climate change, on the other hand there are young people, institutions and organizations who believe in taking action for mankind and planet Earth. Their words are as powerful as the words of stars or powerful people. Their words resonate and echo in the future. Watch these videos. What strategy do they use to raise the viewers’ awareness and to sensitize them to their cause? Discuss in groups. Then think of what images, refrains, catchphrases you could use in your own video. Would you use your own voices? Would you show your faces? Would you use photos or snatches of videos? Would you use a soundtrack?

There are different means used by institutions to fight for a cause. Videos are shot, messages are endorsed by popular people or commoners, or there is the use of social advertising. Do you find social advertising effective? Ineffective? Why (not)? Should governments invest more money on social advertising campaigns to be broadcast on tv or on printed advertising to be printed in magazines/newspapers or put on hoardings along streets or roads.

If you happen to find other interesting examples of social ads, please share them by posting the link in the comment space below.

Now click on sticky moose and let me/us know the ad you liked most? In class you will say why.

While surfing the net after interesting videos for you to watch, I came across this short film by Morgan Freeman. I found it pleasant and powerful at the same time and I would like to know what you think of it yourself.

I would like to conclude this learning path dedicated to the much-debated issue of climate change with a creative writing activity. I invite you to watch the marvellous short film by Werner Herzog, which invites us to look at the world through the “eyes” of a plastic bag. He drags us into an imaginary but realistic journey. You become that plastic bag, what are your emotions? How do you feel? What would you like to say? Let us hear your words, write a poem, choose the title and then post it on the Padlet below so that your classmates can appreaciate your poem.

Feedback. Take a few seconds to say whether you apprecaited this post or not.