Think of the possible ways you could implement in your daily routine to reduce your carbon footprint and compare your ideas with your classmates’.

Read what you could do to reduce your carbon footprint. Which piece of advice would you be aple to pursue easily. Which one is impossible for you to fulfil? Why?

Human activities have an impact on the environment – this impact can be measured as an emission of carbon dioxide. Find out how average emissions differ depending on where you live.

Measuring the impact of carbon dioxide on the environment

This pie chart shows what contributes to the carbon footprint of a typical person living in an MEDC. 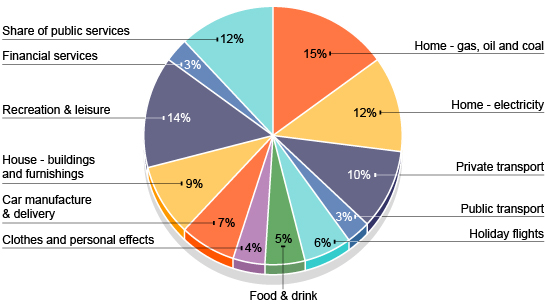 As a country develops its carbon footprint tends to increase.

Some heat energy from the Earth’s surface escapes into space. If too much heat energy escaped, the planet would be very cold. However some gases in the atmosphere can trap escaping heat energy, causing some of it to pass back to the surface.

These are called greenhouse gases, and they keep our planet warm, which is a good thing. Carbon dioxide is an important greenhouse gas.

Humans burn fossil fuels such as oil, coal and natural gas. The energy released is used to power cars and other machines, to generate electricity, and to keep buildings warm. The burning fuel releases waste gases, including carbon dioxide. As the human population increases, more fuel is used, and more carbon dioxide is released.

The extra carbon dioxide increases the greenhouse effect. More heat is trapped by the atmosphere, causing the planet to become warmer than it would be naturally. The increase in global temperature this causes is called global warming.

Humans are very successful living things. We compete with other organisms for many natural resources. These include:

More people mean more use of natural resources, and bigger changes to the environment. The graph shows population growth over the last 200 years.

As an Ambassador of the United Nations Leonardo Di Caprio addresses the Assembly to make a strong point about Climate Change.  While watching the speech, jot down a few words that catch your attention.  What do you like about his speech? Why?  What don’t you appreciate (if there is something you do not find congruent or somehow coherent) and why?