Unhooking the Moon by Gregory Hughes

When an adventurous sister-and-brother duo become orphans, a funny and heartbreaking roadtrip to New York ensues, as the pair searches for their long-lost uncle.

Meet the Rat: A dancing, soccer-loving, fearless ten-year-old from Winnipeg, Manitoba. Meet her older brother, Bob: Protector of the Rat, though more often than not her faithful follower, Bob is determined to build a new and better life for him and his sister in America. Of particular concern for him are his sister’s mysterious fits, which keep getting more and more severe.

On their adventures traveling alone from the flatlands of Winnipeg, southward across the border into America, Bob and the Rat make friends with a host of unlikely characters, including a hilarious con man and a famous rap star. As they struggle to survive in the big city, they realize that finding your uncle in New York is incredibly difficult if you have almost no information about him—even if he is rumored to be one of the city’s biggest drug dealers…

“I would really recommend Unhooking the Moon to all readers especially to teenagers. I think Unhooking the Moon was a thriller, a true page turner”.   These are the words of an adolescent like you, who read the novel and loved it deeply.  She wrote her book report on it and if you are interested in reading it (I think you could benefit from it, not just for her analysis, but for the use of the English language too!) click here. 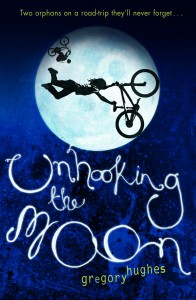 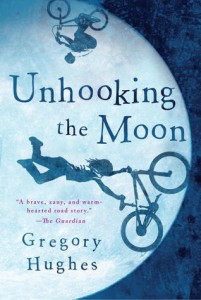 These are the two different bookcovers of the novel you can find.  Which do you like better? Why?

If you could ask the writer a few questions, what would they be?

Look at the interview of a bunch of Italian students.  They are great and I would like to thank them for the wonderful job they did.  Isn’t the translator great too?

Read the interview and see whether your questions are somehow answered.

It would be great if you could create your own booktrailer, since there is not one on the web.  Would you like to be the first ones to launch one? I would be very proud of you if you did!!!

We saw that there are different themes at stake in this failry-like novel.  One of the themes that is not generally dealt with is pedophilia.  Then there are the themes of death, the loss of a dear person to you, the strong emotional bonds between siblings.  Other themes are: friendship, growing up and life as a journey of self-discovery.  Try to make this novel completely yours by creating something worthwhile watching/reading of your own.  I would like you to:

Twelve-year-old Bob DeBillier lives in Winnipeg with his 10-year-old sister, definitely quirky if not actually crazy, Marie Claire, who is known to all as the Rat. Their mother died long ago but their father, although a big drinker, takes good care of them. It’s not long before summer vacation will begin. Normally Bob would be over the moon about school ending, but his mood has been shattered by the Rat’s calm pronouncement that their father (who is not old and seems healthy despite the drinking) will die soon. Bob is outraged that she would make such a prediction but he is also unnerved because the Rat has made prophecies in the past that have actually come true.

Of course, he is still devastated when they arrive home from their last day of school to discover Dad curled on the kitchen floor, his eyes wide open and lifeless. Bob is so upset that he almost is not bothered by the Rat’s blithe pronouncement that “Pa’s a goner!” But when Bob’s little sister insists that their father be buried in the back garden and his death not reported to the proper authorities, he is flummoxed. However, the Rat puts forth a convincing argument, saying the adults in charge are sure to take them away and put them in a home, possibly even separating the siblings. Neither one of them will agree to such a thing.

After their friends help them with the ad hoc burial and funeral ceremony, they discuss their next move. Their father has a brother in New York City, they know. Uncle Jerome completely lost contact with their part of the family, but they know that he has a rough reputation. Jerome’s been in lots of trouble and now is said to work as a drug dealer. Still, he is their only relative and their only hope of living together as a family. The Rat and Bob decide they will take their bikes and backpacks, hop a freight train and make their way to New York. There, somehow, some way, they will find their Uncle Jerome.

The girl at the heart of the book is 10-year-old Marie Claire Wazhashnoons DeBillier, a k a the Rat, a hilariously precocious force of nature who lives near the city of Winnipeg with her kind but boozy father and her 12-year-old brother, Bob, on a prairie “so flat you can watch your dog run away for three days.”

Wazhashnoons, we are told, is the Native American word for Little Rat, the name given to Marie Claire when her French mother, now dead, gave birth while visiting a reservation. As peculiar as her name, the Rat possesses a grab bag of quirks and talents perfectly suited to drive a brother to heights of bewilderment and grudging admiration. She chats fluently in French, English, Spanish and the local Native tongue, is nourished by a dog’s breakfast of religious beliefs, and is always on the lookout for “goddamn pedophiles.” She is also clairvoyant, a gift, her mother’s Native friend says, of “the Great Spirit.”

As narrated by Bob, the story’s straight man, the siblings enjoy an idyllic childhood, replete with pleasures like traveling to school by canoe. But a dark undercurrent runs through this funny novel. Part and parcel with the Rat’s shamanic gift are the seizures she suffers, frightening bouts from which only the hugs and soothing words of her father seem capable of releasing her.

When the siblings’ father drops dead (as the Rat predicted he would), the Rat convinces Bob that their only hope of staying out of a children’s home is to head to New York to seek out an estranged uncle reputed to be a drug dealer. As preposterous as this plan sounds, Bob concludes it is his sister’s best hope: “She couldn’t handle being put in a home. She’s crazy and they’d try to make her normal.”

Although the Rat seems more kooky than disturbed, her mental condition eventually becomes the book’s central concern: The girl is touched, but is she touched by genius, madness or both? As the answer reveals itself, the dynamic between the siblings shifts. While the Rat’s openhearted impetuousness drives their headlong journey, Bob gradually becomes less of a sidekick and more of a protector, soothing his sister while she writhes in agony during intensifying fits.

16 Responses to Unhooking the Moon by Gregory Hughes