The War Poets and more

Regeneration is a prize-winning novel by Pat Barker, first published in 1991. It is the first of three novels in the Regeneration Trilogy of novels on the First World War, the other two being The Eye in the Door and The Ghost Road, which won the Booker Prize in 1995. The novel is loosely based on the history of psychology and the real-life experiences of British army officers being treated for shell shock during World War I at Craiglockhart War Hospital in Edinburgh. 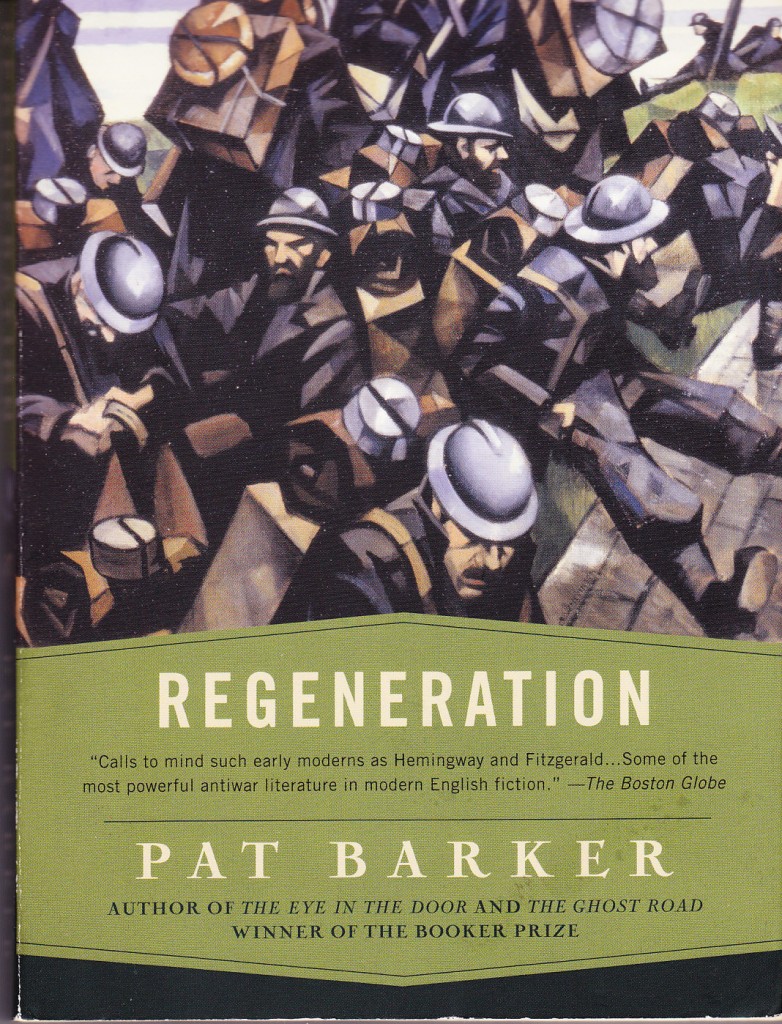 The novel portrays the life of W. H. R. Rivers (his experiments with nerve regeneration) and his encounter with Sassoon.

“He was a very humane, a very compassionate person who was tormented really by the suffering he saw, and very sceptical about the war, but at the same time he didn’t feel he could go the whole way and say no, stop.”—Pat Barker

Shell-shock being, Rivers believes, a kind of withdrawal from a reality too terrible to contemplate, its victims are involved in a “hopeless attempt to forget”. Short, horrible stories sometimes attach themselves to traumatised patients, but none of its victims is able to talk about what has unhinged them. We are given some of Prior’s and Sassoon’s fragmentary memories, but the novel largely imitates the appalled soldiers’ habits of repression.

Some characters are thus  historical – William Rivers, the doctor treating shell-shock victims during the first world war; Siegfried Sassoon, the poet, who was one of his patients – and some invented: Billy Prior, another traumatised soldier, and Sarah Lumb, the munitions worker whom he is courting.

In Sassoon’s autobiography (under the guise of The Memoirs of George Sherston) Rivers is one of the few characters to retain their original names. There is a whole chapter devoted to Rivers and he is immortalised by Sassoon as a near demi-god who saved his life and his soul. Sassoon wrote:

“ I would very much like to meet Rivers in the next life. It is difficult to believe that such a man as he could be extinguished. ”  —preface to “Medicine, Magic and Religion”

The first book, Regeneration deals primarily with Rivers’s treatment of Sassoon at Craiglockhart. In the novel we are introduced to Rivers as a doctor for whom healing patients comes at price. The dilemmas faced by Rivers are brought to the fore and the strain leads him to become ill; on sick leave he visits his brother and the Heads and we learn more about his relationships outside of hospital life. We are also introduced in the course of the novel to the Canadian doctor Lewis Yealland, another factual figure who used electric shock treatment to “cure” his patients. The juxtaposition of the two very different doctors highlights the unique, or at least unconventional, nature of Rivers’s methods and the humane way in which he treated his patients (even though Yealland’s words, and his own guilt and modesty lead him to think otherwise).

If you are interested in reading the novel for your own personal knowledge, you could bear these points in mind:

1.  The home front: How were people at home affected by the war?  Did they understand the war differently from those fighting it?  How, if so?  What were the effects of that difference?

3.  Women in World War One: How did the war affect women in new ways?  What were the gains; what were the losses? 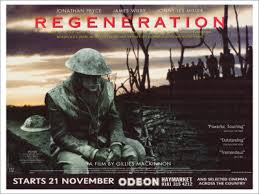 Now watch the beginning of the film adaptation.

Sassoon is not shell-shocked: his friend Robert Graves has used his influence to save Sassoon from punishment for his exhibition of anti-war sentiments. He has written a public declaration against the war, and while on leave has thrown the Military Cross he had been awarded into the River Mersey. The novel includes several of Sassoon’s poems, which recoil from the horror and futility of the war and savage those who prosecute it. Yet he is not a convenient focus for any reader’s anti-war feelings. He is determined to return to the front, and to have Rivers tell him that he is “pleased” at this decision. 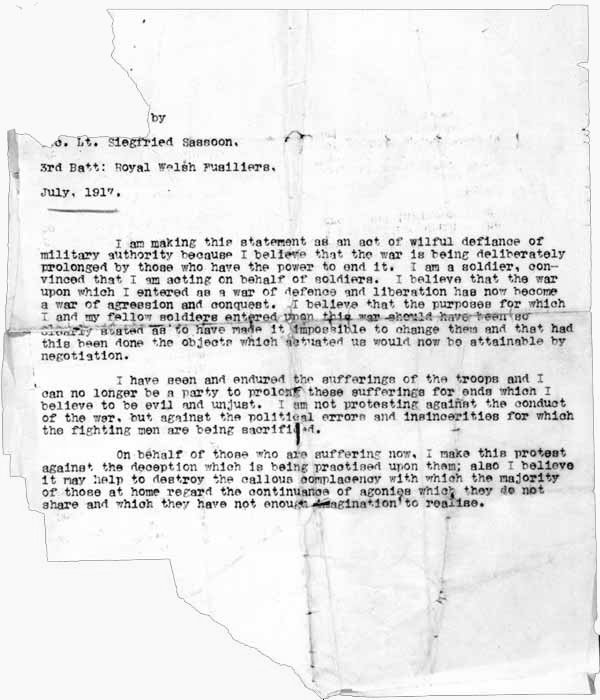 In July of 1917, mid-World War I, following a period of convalescent leave during which he had decided to make a stand by not returning to duty, celebrated poet Siegfried Sassoon sent the following open letter to his commanding officer and refused to return to the trenches. The reaction was widespread, thanks in no small part to copies of the controversial letter — titled “Finished with the War: A Soldier’s Declaration” — reaching local newspapers, the House of Commons (where it was read out by Hastings Lees-Smith), and eventually the London Times.

Sassoon  escaped a court-martial as a result of his being declared unfit for service and treated for shell-shock.

I am making this statement as an act of wilful defiance of military authority because I believe that the war is being deliberately prolonged by those who have the power to end it. I am a soldier, convinced that I am acting on behalf of soldiers. I believe that the war upon which I entered as a war of defence and liberation has now become a war of agression and conquest. I believe that the purposes for which I and my fellow soldiers entered upon this war should have been so clearly stated as to have made it impossible to change them and that had this been done the objects which actuated us would now be attainable by negotiation.

I have seen and endured the sufferings of the troops and I can no longer be a party to prolonging these sufferings for ends which I believe to be evil and unjust. I am not protesting against the conduct of the war, but against the political errors and insincerities for which the fighting men are being sacrificed.

On behalf of those who are suffering now, I make this protest against the deception which is being practised upon them; also I believe it may help to destroy the callous complacency with which the majority of those at home regard the continuance of agonies which they do not share and which they have not enough imagination to realise.

We are now going to listen to some passages of an interview to Pat Barker.  You are invited to listen to the whole interview at home and to take relevant notes to be later discussed in class with me and your classmates.  Before we start, what are the questions you would like to ask Pat Barker?

This entry was posted in Our School Projects, Project -The Great War-. Bookmark the permalink.